The Benefits of the DNA Program Theft Protection

PIN and VIN can be easily adjusted on your computer

Thefts can be identified quickly and globally

How does it work? 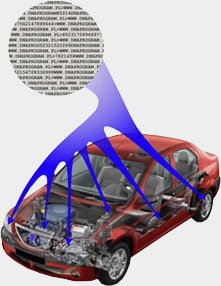 The Australian derived DNA Program is the one and only technology available on the market against which both the thief and the illegal trader are powerless.

The much higher effectiveness of the DNA Program over any other technologies and mechanisms protecting our cars from being stolen, derives from the fact that unlike any other form of protection, DNA is impossible to be „bypassed“ by thieves or illegal traders.

The aforementioned helplessness of those groups of people is responsible for cars protected by the DNA Program being branded on different internet forums as „skunks” which should not be touched, even by „professionals“. Additionally thieves and illegal traders immediately realise that the likelihood of their inevitable penalty is far greater by dealing with any cars or parts marked with DNA than that associated with a regular car alarm or GPS alarm. The risk for the thieves stealing a car protected by a regular alarm or even a GPS alarm exist only for a few moments during the act of theft itself, whereas with DNA Program the risk will be with them for as long as they are in possession of the stolen car or its parts. Even if the car or parts are sold further down the chain, the proof and link to their crime remains. People responsible for the safety of their cars, people who care for the integrity of their cars, and finally people who make a living out of cars not to be stolen, will sooner or later all opt for the DNA Program solution.

Without DNA Program your car can easily become a „donor“ for the illegal spare parts market!

Do you want to prevent this?

In the event that a car protected by DNA Program will be stolen, DNA Program unlike any other producer or distributor of car alarms or GPS alarms is offering to their clients the „Triple Warranty“**

The DNA Program’s once off Euro 300 cost for the car’s lifetime safety is below that of the cost of any middle of the range car alarm, upon which their noisy action people around the world have grown an indifference to.

The 300 euro is also much less than any GPS alarm which is not only more expensive initially, but expensive to maintain on a monthly basis, and yet it is easy to be „neutralised” by „professionals” with readily available devices.
Once the GPS is „neutralised” it stops serving its purpose altogether.

*compensation is eligible for Private Owners only